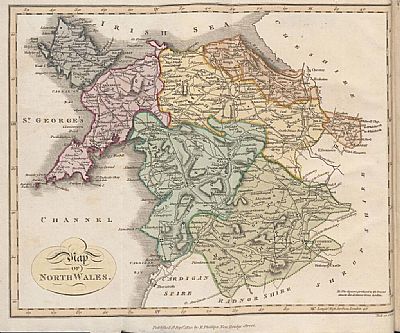 Telling the Story of Negro Cloth and Welsh Plains

In the eighteenth century Wales was notable for producing a coarse woollen fabric from which clothes for enslaved workers in the New World were fashioned. This was ‘Negro Cloth’, a drab material that is little remembered today. Yet it was important. ‘Who would believe’, asked one eighteenth-century commentator, ‘that woollens constitute an article of great consumption in the torrid zone? Such, however, is the fact. Of the coarser kinds especially, for the use of the negroes, the export is prodigious.’

So it was. Weavers of Negro Cloth served a market that underwent an astonishing expansion across the eighteenth century. Between the Glorious Revolution of 1688 and the War of 1812 the enslaved population of the British sugar islands underwent a more than eight-fold increase, from 87,000 to 743,000. The rate of growth in British North America was even greater, from about 10,000 individuals to 1.19 million. It was a market that could never be satisfied. Slave workers usually required a new set of clothes every autumn, it being taken for granted that a year’s labour would reduce the previous year’s ration to rags. By assuming a standard allowance per slave, we can make a rough-and-ready calculation of how much Negro Cloth was consumed every year. Happily, the sources available to us tell a consistent story: about 5 yards was allotted to every adult. Juveniles were probably allotted something a little smaller, so we might settle on 4 yards per slave as an average for the eighteenth century. That suggests that 388,000 yards of woollen fabric were consumed by the enslaved c. 1690, vaulting to 7,736,000 yards in 1812.

Welsh weavers did not have it all their own way in this burgeoning market. There were rival products. One of them, marketed as ‘Kendal Cotton’, was manufactured in Cumbria. Another type, known as ‘Penistone’ after the moorland parish of that name in the West Riding of Yorkshire, could also be found throughout the plantation world. The dominant variety of Negro Cloth, however, known as ‘Welsh plains’ or ‘Welsh cotton’, was produced in Montgomeryshire and Merionethshire. ‘Good Welch cotton seems upon the whole to answer best’, one slaveholder announced; its rivals were ‘light and insufficient’. The whole purpose of Welsh woollens, one observer went so far as to state in the 1770s, was ‘covering the poor Negroes in the West Indies’.

The making of Negro Cloth was clearly a significant phenomenon, especially in mid-Wales, yet it is little attended to by textile historians and it figures hardly at all in popular memory. Nevertheless, the bare outlines of the story can be told. During the sixteenth and seventeenth centuries woollen manufacturing spread through upland pastoral districts where impoverished peasant households sought a way of boosting their incomes. The production of low-quality textiles was a way or doing so. The carding of wool and the spinning of yarn could be done in the slack periods that broke up the agricultural routine of the wet uplands. Weaving was performed on looms housed in lean-to additions to farmhouses and cottages. The proliferation of fulling mills along mountain streams in Montgomeryshire and Merionethshire in the sixteenth and seventeenth centuries is an index of the industry’s growth. It is one of the few indices available, for this widely dispersed domestic trade otherwise left few traces in the form of guilds or cloth halls.

Fulling was the only finishing operation carried out locally. High-value, high-skill processes such as shearing were carried out at Shrewsbury, over the border in England, where the formidable Drapers Company exerted a firm grip on the marketing of mid-Wales textiles. In the seventeenth century, Welsh cloth was sold in western Europe; in the eighteenth, however, it was sent to Atlantic markets. When, in the 1780s, Elias Ball, a South Carolina planter, investigated the source of the Negro Cloth worn by his slaves, he discovered that ‘the great Markett for that article… is at Shroesberry [Shrewsbury] the Capital of Shropshire’, drawing on production zones to the west. Growing numbers of rural dwellers in Montgomeryshire and Merionethshire were harnessed to the Atlantic economy. The labouring poor resorted to industrial by-employments in response to mounting impoverishment. They were joined by small hill farmers who sought to cover rising rents, rates, and tithes by participating in woollen production. By mid-century parishes in the woollen-producing heartland of Montgomeryshire swarmed with spinners and weavers. Some hamlets registered surges in population that can only be accounted for by the employment opportunities afforded by the woollen industry.

Much of the export went by way of London. When Henry Laurens, a Charleston merchant, visited the imperial capital in 1774 he was confident that ample supplies of Negro Cloth would be available: ‘Shall inspect Such parcels as are in the London Warehouses to Morrow or next Day’, he told his partners in Charleston. If stocks were low there was no cause for alarm, for fresh deliveries were never far off: ‘parcels of Plains are hourly expected from Wales’, he told one associate; ‘a large Supply by Sea from Wales’ was imminent, he told another. Nevertheless, London probably played a less central role as the eighteenth century wore on, giving ground first to Bristol, then to Liverpool.

As the decades passed, factors from the slave ports usurped the position of dominance once enjoyed by the Drapers Company of Shrewsbury. Once, weavers had trudged with their cloth to local market centres; now, the agents of international cloth merchants came to them. ‘The Liverpool Merchants have now person on the spot, to purchase of the makers; and to assist the poorer manufacturers with money to carry on their trade’. Cash advances to ‘poor manufacturers’ were no doubt very welcome, but they were also a sure sign that ownership of the product had shifted from the weaver to merchant capitalist. Abject proletarianisation came next.

Indeed, the fate of many of those who worked in the mid-Wales woollen industry was not enviable. Although Welsh plains were used to clothe some of the most savagely exploited human beings of the age, those who carded, spun and wove wool in the mountain parishes of Merioneth and Montgomeryshire were themselves subject to cumulative social and economic degradation. The rural population had turned to woollen production in a desperate effort to meet the increased rental demands of an avaricious landlord class, as we have seen, but much depended on the competitive strength of their product in far distant markets. As the eighteenth century drew to a close that strength became increasingly uncertain. Although the market was Negro Cloth was expanding, the political context was increasingly unstable. The disruption brought about by the American Revolution was quickly overcome, but renewed warfare in the 1790s and 1800s brought far tougher times. Negro Cloth from Wales continued to circulate in Atlantic markets after the close of the Napoleonic Wars but with increasing difficulty.

By the 1830s the domestic woollen industry of mid-Wales was no longer spoken of as being either thriving or export-driven. The reasons for that have to be surmised. It may be that Welsh weavers were out-flanked by rivals from industrialising New England, whose innovations in the making and marketing of cloth proved too competitive. Things became acute after the War of 1812, which choked off British exports to the United States and acted as a great stimulus to American industry. Textile manufacturers in the United States were now well placed to take over domestic markets that had once been ceded to Welsh products.

Things were no better in other historic markets for Welsh plains. The demand for Welsh-made Negro Cloth must surely have contracted in the West Indies as well. Emancipation in the British Caribbean in the 1830s introduced a degree of consumer choice that had never been known under the old plantation economy. Wherever they had the choice, ex-slaves gave up heavy woollens for more comfortable cotton fabrics. The mountain communities of Merionethshire and Montgomeryshire that relied on the domestic manufacture of plains were plunged into misery as a result. By the time of Queen Victoria’s accession the woollen-producing districts that girdled mid-Wales recorded some of the highest levels of pauperism in Britain. Deindustrialization and depopulation became intertwined processes. Looms were abandoned, the people left, and the memory of Welsh ‘Negro cloth’ left with them. It is time it was restored."