Where did we look and what did we find?

The Royal Commission on the Ancient and Historical Monuments of Wales gave us a good start by providing a list of 500 Pandys or Pandau (fulling mills) across Wales. Actually, this was a bit overwhelming, but it put the scale of rural wool production in Wales into perspective - it was massive! 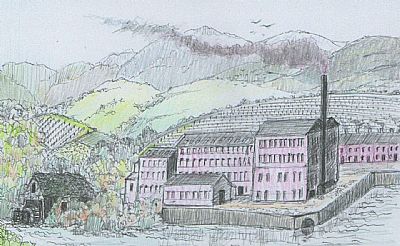 Visits to St Fagans, the Welsh Wool Museum and the Newtown Textile Museum, gave plenty of information about the later phase of our research, from the later 1700's through to 1850 when weaving, and later spinning, were mechanised, but cloth was still being produced for the Plantation markets, especially for North America.

However, apart from the publications of Geraint Jenkins eg ‘The Welsh Woollen Industry’ which are now out of print, there is little that is available in bookshops today that tells of the important role that the early Welsh woollen industry had before the times of the Welsh Woollen Mills.
From Fulling Mills to Factories

Community Research Volunteers, CRVS, were able to find lots of information through internet searches and also found out more information by visiting local libraries and archives.

Prof Chris Evans provided us with a great article to enable people to get the big picture to enable them to fit their findings into context - check HERE.

CRVs were encouraged to create their own time line, so that they could fit events and developments into the dates of the project 1650 - 1850. Check HERE to see how this worked

A range of good resources were developed in the 2007 bicentenary of the ending of British Slave Trading, but not slavery, as this went on in the British colonies until the 1830's and in the United States until years later.

Check out the following BBC programmes produced in 2007 - 'Wales and Slavery" Part 1 and Part 2  now on YouTube.

In the first phase of the project, Community Research Volunteers CRVs were recruited mainly from WonderWool and our direct links with Spinners, Weavers and Dyers Groups. We concentrated on finding out how the cloth was produced and what properties it had that made it seem suitable for clothing enslaved workers. However as the volunteers undertook visits, read and researched, it became clear that we were really only looking at 3 areas where the cloth called Welsh Plains was woven and processed.

During the second phase, CRVs reviewed what had been found and focussed on exploring the areas where Welsh Plains was produced around Dolgellau, Machynlleth and Glyn Ceiriog. This also gave an opportunity to look at the processes involved in fulling and finishing the cloth.

As we moved on to the third phase, we were able to explore more about the many local people and factors from Liverpool who were involved in the transportation of the cloth and started to work out some of the logistics and explored the significance of other places: ie Shrewsbury and Oswestry, Liverpool and Bristol.

The London markets, the Low Countries (colonised by Spain), West Africa and the New World also featured in the story, but we were fortunate to find advisors who volunteered to help us put all the pieces together, from the points where the cloth left Wales and was transported around the globe.

Through the feedback from the teams of Community Research Volunteers, we found that very little was known about this fabric, yet it seems there was plenty of information available, why was this history hidden?  This opened another strand to our research and this proved fascinating.

As a better understanding of the social history emerged, as we initially suspected, the role of the Shrewsbury Drapers and the Liverpool and Bristol Merchants became particularly important areas to explore. However another group of people were key to the development of the areas where the production of Welsh Plains was increased dramatically to meet the requirements of the Liverpool slave ship captains.  Finding out about this group of people who worked for the slave ship captains have proved elusive, yet they must have developed good working relationships with the farmers, weavers and fullers. Click HERE to find out more about the factors.